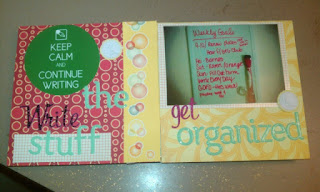 Day three was 'the write stuff' and day four is 'get organized'. I've spent a lot of time writing and trying to be more organized and productive. It's taking my mind off of a bit of things, but I still can't help thinking about it.
It still hurts.

It's okay to judge (sometimes)...especially in the case of paranormal Amish Vampire romances..best quote from book is 'he couldn't get enough of her, of her apple turnover scent.'
Groan

Happy Creating! Nicole K/GothamGal at 12:13 AM 0 Things to Discuss 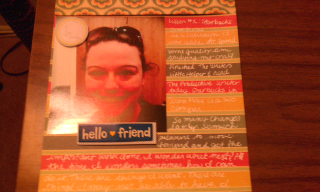 Day one lesson: Starbucks is a salvation. Spent about 5 or 6 hours there today, reading up on writing. I finished a book and then read a second one about the writing life. Journalled a bit. Wrote down some quotes. Took a picture of myself in the bathroom with my Retro Phone app from my phone. I like it, will have to get a better picture of it, soon. Printe out the photo with our HP multi-print machine. Used a Signo uniball pen (there's a bit of a flaw--it's not fluid to a certain extent). Wrote about my day. 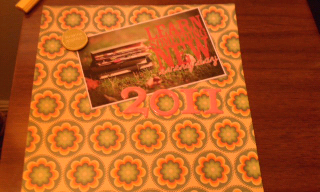 This is my cover--I REALLY like it. Thickers are called Honey. Used an amy tangerine/AC sticker on both pages today.

Went to someplace called the Scrapbook Oasis today, they were totally nice and I was having a great time with the owner (?) I think. Picked up some stuff (haul posted, but can't find it right now). They were uber nice, especially about ordering me a few albums--have had a really hard time finding those AC modern albums locally. Didn't want to wait to get $50 in my bucket at a certain website that usually helps me get free shipping in a pinch, so yeah.
Have all intents and purposes to finish the album this year. Even a little excited about it, but I wonder, how much strength am I going to be called to have?
Happy Creating! Nicole K/GothamGal at 1:13 AM 0 Things to Discuss

Have this nifty application on my phone that should allow
Me to post more, and now all I have to do is create!
Today is exceptionally hot. Even here at the beach. So I am battling the heat with some cool things, like this sushi!

Beyond Blogging for Scrapbookers

A few years ago, I signed up for a very unique class, Blogging for Scrapbookers. I fell in love with blogging and decided it was a natural extension of what I liked doing and thought it a great way to stay in touch with some really creative people.

I'm going to post a few times a week, really hold myself accountable to post here. I started a book blog, and have been loving the review opportunities, but I've been also doing a few crafty things lately, and that revisit of things I used to love doing prompted me to

For example, I went on a hunt for the last two weeks trying to find a replacement blade for my paper trimmer (I left my big rock and crop at my old house, about 3000 miles away). Who knew it was so hard to find a blade for this bad gal?

I looked at a few local shops, Target, Walmart…pretty much everywhere I thought of going (even office supply stores), to no avail. The JoAnn fabrics near the house didn't have it, the woman working the section said the replacement blade I was looking for wasn't sold separately and didn't exist. And then her face fell when I showed her the barcode tag for the item (after looking behind a sale sign). I was just trying to see if they had them. She told me they didn't stock anything in the back, and she didn't believe that the product existed. I thanked her for her time and said I would go somewhere the product did exist.

I just sort of figured I had to look around, but decided not to actively look, that way they would pop up.. And they did! We went to the Peach Café on Monday, we had a coupon for buy one get one from the entertainment book, so I got the HBAB (a yummy open faced French Ham with brie on top of it and a green salad with blue cheese vinaigrette. They were not kidding about the vinaigrette part—it was tart, but there was yummy passion iced tea (Website: http://www.thepeachcafe.com/LunchMenu2.html). Then we went to walk to the theatre, eventually found the blades at a cute little store near the theatre(http://www.pagesfromtheheart.blogspot.com/). We realized we had time to go to the coffee shop (we had no idea what we were going to see, I said I didn't really want to see source code, but I would if we had to) and I got a humongous BLUE Raspberry Hawaiian Ice. It was GINORMOUS! Then, back to the theatre in the drizzly day.

Saw 'The Source Code' and I will admit it was actually pretty good. The pacing and theming of the film was great. While I figured out a few of the bigger plot details quickly, it still didn't deter me from being interested. So totally worth seeing! Then I drove home, went to sleep for a bit and woke up only to realize that I wanted to reorganize my paper—I found a ton of it and proceeded to alphabetize half of it. It was nice to be able to do that, and earmark paper for the Disney project as well as figure out what I want to use to document my travel to So Cal. I lost a lot of cardstock in the move, and I'm nowhere NEAR refilling it, I'm missing quite a bit and while I did pick up a few generic packs, I have to work on seeing how those work.

I have a few more of the 6x6 or 8x8 packs that I've picked up—really love those packs, but I sorta hate tearing them up—anyone else like that?

Going to start working on the BBFS class this week. Think I'll also post a copic lessons learned post. And an iCopic review in the near future.

New Challenge Blog to be excited about!

Hey there! I'm back, and trying to get back a lot more, I promise.
I've been doing a book blogging thing, and I've not done a lot of crafting...Which I've been wanting to rectify. I have tons of pictures on my computer, I guess the next step is to digi or physically scrap!
Shimelle's having Blogging for Scrapbookers again, and I'm REALLY excited about it!
I took a copic class, and I've been buying some supplies, but I just need to sit down and do it... So look for that in the next couple of weeks.
I've been reading blogs since I've not been creating and kept ideas and everything that I've really been into, I just haven't been hit with inspiration.
Take care all!
Happy Creating! Nicole K/GothamGal at 2:04 PM 1 Things to Discuss

Check out the AMAZING new store!